As someone with no tattoos, I can only imagine the horror some experience when they discover their ink has a hidden meaning. Like this woman in our featured story for today.

It’s not unusual for people to end up regretting their tattoos, whether they got inked on a whim during a night out, or they break up with their partner after getting their name tattooed. But one woman on TikTok thought nothing could turn her off of her stylish pineapple tattoo – until she discovered the secret meaning behind the fruit.

Brittany Lewin has a tattoo of pineapple inside a triangle on her forearm that appears upside down when her arm is raised. She was in love with the ink before her best friend told her to Google the hidden code she’d unknowingly inked.

Lewin bravely shared the humiliating text conversation for all the world to see.

As it turns out, upside-down pineapples are apparently a secret sign used by swingers to identify those on the lookout for a swinger party – while a pineapple placed on the porch or mailbox of a house also signifies a swinger party is currently going on inside. Swingers also reportedly identify each other in public by opting for clothes that feature the tangy tropical fruit. 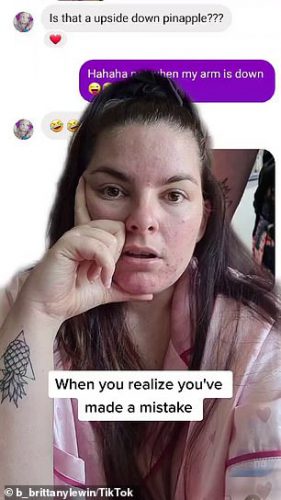 In her viral TikTok video, which has since bubbled up again, Lewin shares a conversation between her and a friend about a new tattoo she’d gotten.

“Is that an upside down pineapple?” her friend texted her.

“Hahah not when my arm is down,” Lewin answered.

Lewin sent her friend a photo of her new tattoo but wasn’t prepared for the response her friend gave her. “It’s still going to make me giggle,” her friend wrote. “I only just found out what an upside down pineapple means.”

“Wait what? Googling haha,” she wrote. She then shared her search, which showed that an upside down pineapple tattoo isn’t exactly for fruit lovers.

“Pineapples are a secret sign used by swingers to identify each other in public,” the search result states. “An upside down pineapple means a person is in search of a swinger party,” it continues.

“When you realize you’ve made a mistake,” Lewin wrote in the video’s text overlay. She added that she unknowingly has been posting videos of her new tattoo on her Instagram Stories “daily.” 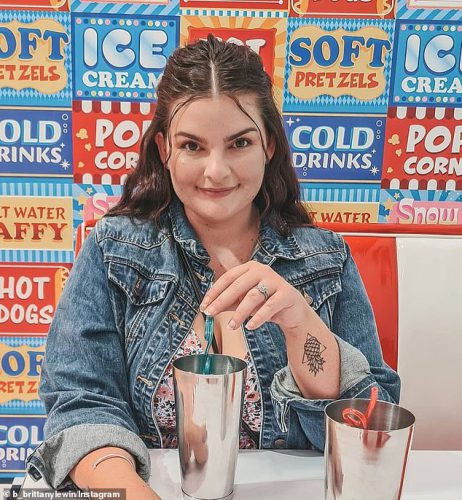 Folks online were cracking up at Lewin’s mistake.

“Every time I see the tattoo, I was thinking to myself ‘does she know,’” another TikTok user wrote regarding Brittany Lewin’s upside-down pineapple tattoo.

“I always thought you and James were just into some extra fun stuff. Lol, I’m sad that you didn’t actually know,” another quipped.

“Just turn [the tattoo] into Spongebob’s house and add some seashells,” another user on the Chinese-created platform suggested.

“Omg, same. I was just waiting for you to figure it out,” another person wrote.

“I feel so bad for you,” another TikTok user said.