The two girls were taking a break and relaxing on their paddleboards when one paddleboarder felt a large thump on the bottom of her board. Naturally, her heart started pounding harder as she wondered what was underneath her.

These paddleboarders got an amazing, once-in-a-lifetime experience when a manatee climbed on top of their board!

Celine Chasteen and her friend were paddling in the waters in Jupiter when two manatees popped up in the waters near them. And one was very friendly. Chasteen told WPTV that the “sea cow” was playful and kept rolling on its back. It even put its flippers on her board. Her friend caught the rare and friendly encounter on video. After its short visit, the manatees swam off.

“We were going along the coast and I saw what I thought were rocks, but then they started moving,” Chasteen said. “The next thing I know, there’s a manatee putting his flippers on my board.”

Manatees are peaceful creatures, typically spending their days lounging and lazily swimming through the soft currents of the warm bayous. Sometimes they’ll surface, acting more like sea dogs than any frightening image that visitors may have conjured up. 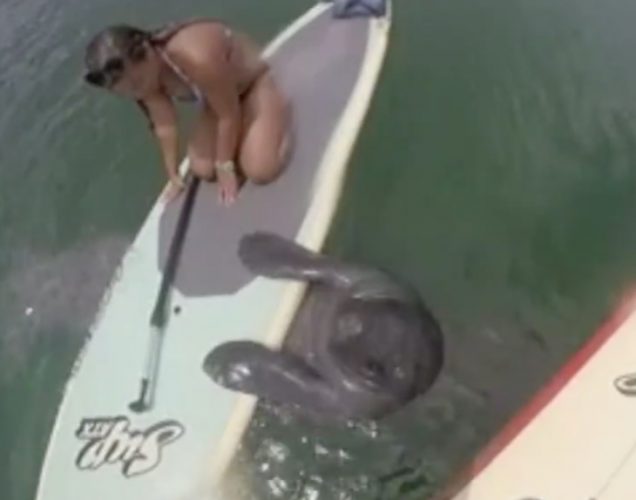 The memorable little encounter lasted only about 30 seconds, but that’s all it took for the manatee to win her over with his charm.

“At first, I was like, ‘What is going on?’ But honestly, it was so cool. I’ve never experienced anything like that before,” Chasteen said, adding: “I thought he was really cute. He was really nice and stuff. I hope he drops by again.” 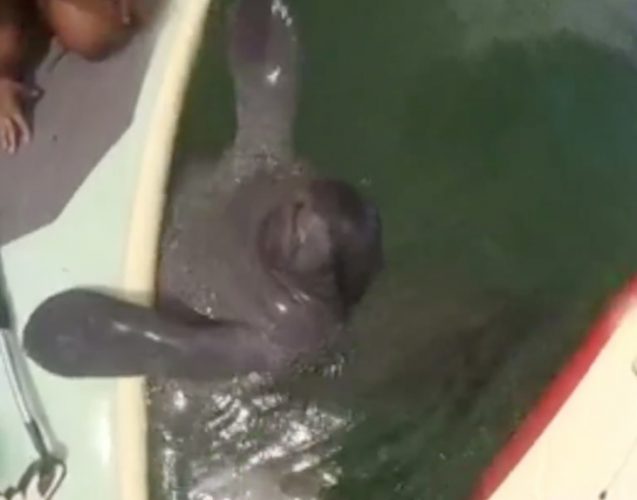 “It’s a life-changing experience for some folks. You get in the water, you see how friendly and loving they are, you’re much more likely to want to protect that animal. You’ll never speed through a manatee zone again.”

“Unfortunately, the Florida manatee population is endangered, and these animals face a number of human-made threats. In November, as manatees search for the warm-water shelters once common along the Florida coast, we take this time to raise public awareness for these beloved yet endangered sea creatures,” Defenders.com revealed.

Manatees are a protected species and should never be touched or pursued as it’s against the law, reminds The Florida Fish and Wildlife Conservation Commission. If a manatee is avoiding people, it should not be followed for a closer view. If they are like this playful one, then do what Chasteen and her friend did, look but don’t touch.