One North Carolina business is fighting back after being slapped with a lawsuit against their RV Park – for their incredible patriotism.

Marcus Lemonis, the chairman and CEO of Camping World got an unimaginable lawsuit against him and his RV location, Gander RV from the city of North Carolina last week. The lawsuit states that the business is violating a city ordinance by flying an American flag that is much larger than what the city permits for businesses.

On May 20, the city of Statesville, North Carolina released a statement stating that Gander RV has a permit approved for a 40×25-foot flag on its property but instead flies a 40×80-foot flag – which is prohibited by the city.

But Lemonis is hardly afraid of the lawsuit – explaining that the business will not be backing down. 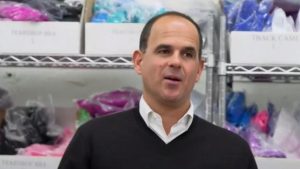 The celebrity CEO is standing his ground as he publicly tweeted to tell the City of Statesville that the 3,200-square-foot flag isn’t going anywhere.

“Hey @cityofsvl we have received your lawsuit regarding our #usflag #AmericanFlag. It will not come down.”

So, there’s where the rubber meets the road. Or where the flag meets the… wind?

Since October 2018, the city has been charging Gander a $50-per-day fine until the flag is replaced. Lemonis shared on Twitter an email he received that said the fine was worth more than $10,000.

Lemonis said the flag poses no safety hazard whatsoever. The city, in a post on Facebook, had this to say:

“The City of Statesville stands by our flag and what is represents. We are so much more than a one flag town.”

“Please know that it is our job to protect our citizens and the businesses that call the City of Statesville home. We take our laws and ordinances very seriously. Our doors are open to any business looking to prosper and grow in our community. We only ask that the proper channels are followed. That is the first and necessary step to any potential change in code.”

A petition has been created for the company, receiving more than 150,000 people in support. Camping World posted on its Facebook page on May 18 stating,

Unfortunately, the city isn’t budging either. The city responded by explaining that they stand by the flag and its representation, but they take their laws and ordinances very seriously.

Watch the video report below for more details: