The Berwick community is calling him now a hero after he heard a woman screaming. That was all it took for him to chase the guy through the parking lot down and then hold the guy at gunpoint. Thankfully, the surveillance footage showed the actual incident.

While shopping at a Kroger store in Savannah, Georgia, Damian Austin, a veteran of the United States Marine Corps heard a scream from a woman that made him stop at his tracks.

Austin recalled, according to KFOR report:

According to The Blaze report, other shoppers also noticed the screams, which were allegedly coming from the bathroom. For a few moments, there was uncertainty in the store. Then, observers immediately noticed the unimaginable had just happened. The woman was reportedly sexually assaulted inside the store’s restroom after a man followed her, and the suspect immediately run out of the bathroom and attempted to run away from the place.

“A lady behind me just said, ‘He raped that girl in the bathroom,’ and once she said that there was nothing else for me to do besides go out the door after him.”

That was all it took for him to go into action. In this circumstance where others would run in the other direction, he immediately chased the suspect through the parking lot and eventually, caught up with the suspect.

Yes, the 25-year-old suspect is Gregory Hathorne. Austin caught him up in the back of a nearby Ace Hardware store. Austin ordered Hathorne onto the ground and held the suspect at gunpoint. WSAV was able to obtain security footage that captured the exact moment.

“I told him to put his hands in the air. He complied and put them up. I told him to get on the ground, and he tried to say something, and I said, ‘Don’t say a word.’”

A woman lent the Marine hero a hand, giving him a pack of large zip ties from the store while he held Hathorne on the ground. 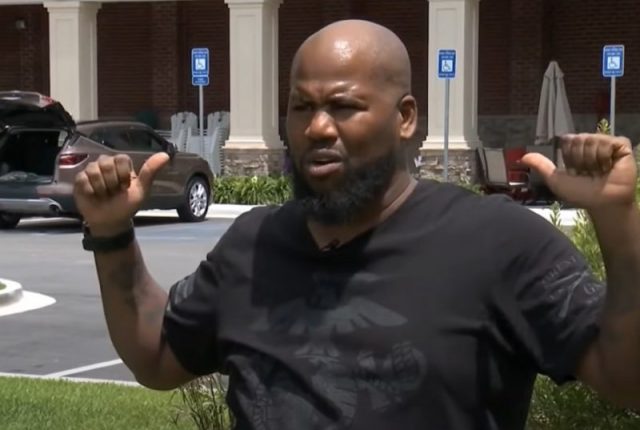 “She went inside the store. A minute later, she came out with a pack of large zip ties, and so she pulled out a couple and walked over there. I kept drawing on him and making sure he didn’t move”

Finally, the Chatham County Police Department arrived on the scene, placed Hathorne in handcuffs, and took him into custody. Hathorne was arrested on charges of felony kidnapping, misdemeanor battery, and felony rape and was held at the Chatham County Detention Center.

Because of the incident, the marine has since been hailed a hero for pursuing the rape suspect.

To express his recognition for Austin’s bravery, the store manager of Ace presented the heroic Marine with a $100 store gift card. However, Austin quickly pointed out that he didn’t do it for the award and has one goal in mind was simply to make his neighborhood safer.

“I immediately thought, ‘My wife shops here, I have friends whose wives shop here, my son works here. So it was just about not letting this person get away after he did what he did. There are people who still care, and they’ll act in time of need.”

Austin said he wishes the victim finds some relief in knowing her suspected attacker is already behind bars.

The directors of the Rape Crisis Center of the Coastal Empire, Chief Jeff Hadley and Doris Williams, applauded Austin for going into action rather than doing what most people would do, recording the havoc.

“We’re very thankful for those citizens — it was very brave of them to do that. You know, oftentimes we see a lot of people standing around with a phone and film something, but they won’t intervene.

“Because in this day that we are in now you have people and sometimes when they see things they’ll record it. They’ll put out a camera before they call 911. I hope that in any situation we will see others rally and respond to support a survivor.”

Because of the Second Amendment, Damian Austin smoothly accomplished what he set out to do. A good guy with a gun removed a rapist from our streets. Although it’s an awful story, fortunately, it has a better ending than it might have had otherwise.

Gregory Hathorne will face the repercussion of his actions rather than getting away with a heinous crime, salute Damian Austin.