A racist English professor who recently drew controversy for her racial bias tweets just got promoted by the university.

In her recent tweet, Cambridge University professor Priyamvada Gopal said: “I’ll say it again. White Lives Don’t Matter. As white lives.” She has just proudly announced that she has been promoted by Cambridge.

Meanwhile, instead of taking action on this racial bias statement, Cambridge University even defended the racist professor.

The University defends the right of its academics to express their own lawful opinions which others might find controversial and deplores in the strongest terms abuse and personal attacks. These attacks are totally unacceptable and must cease.

The University defends the right of its academics to express their own lawful opinions which others might find controversial and deplores in the strongest terms abuse and personal attacks. These attacks are totally unacceptable and must cease.

Gopal is a professor in colonial and postcolonial literature at Cambridge University, she has an ample platform from which to proselytize anti-Western, anti-capitalism, and anti-white precepts.

It’s no secret that this extremist ideology has infested academia and, as yet another professor proves, it’s the only acceptable dogma on campus.

What passes for education in her classroom recently made its way onto social media when the professor brazenly displayed her racial bias. Unafraid of consequences that would otherwise apply if any other demographic were targeted, Gopal tested the waters of the university’s discrimination policy with a deliberately provocative tweet denigrating her white students, colleagues, and people in general.

Then she continue spreading her racial bias on Twitter:

She later added, “Yes, all lives matter. White lives as white do not.” 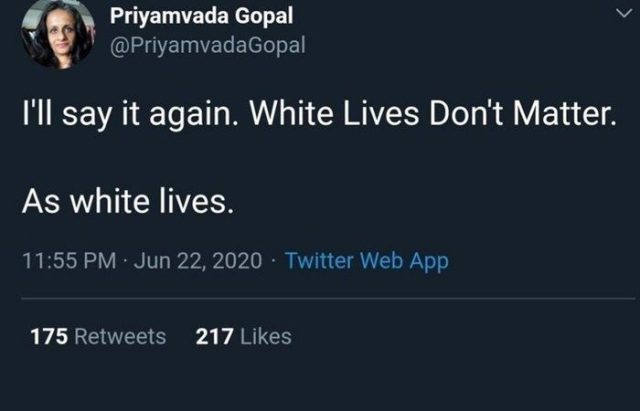 This edgy professor has been openly posting racial bias statements in her social media accounts for quite a while. In her view, white people are inherently racist and morally inferior, and neither their alliance nor their self-flagellation rectifies this.

“So you know, white people in white supremacist societies have a long way to go etc, white people have a lot to learn about race, racism, their habits of thought, their ingrained assumptions.”

Surprisingly, the University continues to ignore this blatant racial bias toward whites. Even after confessing her desire to assault her white male students, the school has refused to condemn her words.

Yet Cambridge university doesn’t believe that her racial prejudice interferes with her ability to treat her white students fairly. 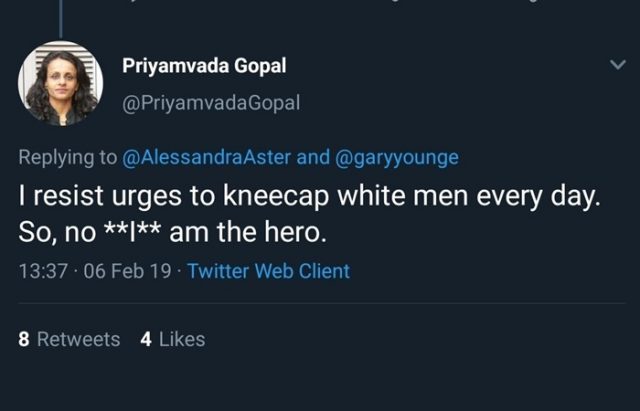 According to Varsity report:

Gopal claims that she has received threatening messages in response to her tweets. She says she has received emails that accuse her of being “disgusting inside and out” and telling her to “pack up your sh*t and go home” if she has such a disdain for white people. Another response allegedly urged Gopal, “kill yourself.”

A petition to call on Cambridge to fire Gopal reached over 8,000 signatures before being removed from the website, possibly due to Gopal’s urging her followers to report the petition for harassment.

Others have pointed out the university’s hypocrisy in its defense of Priyamvada Gopal while dismissing sociologist and intelligence researcher Noah Carl for his research on race and intelligence, and Jordan Peterson for his stance on political correctness.