Looks like ratting on the government got this man savagely killed in his own hown by a very powerful group. And when we’re talking about California government, you know you’re messing with a bunch of messed up mother truckers.

In a story that has people listening, one brave man was on his way to expose the heinous crimes being committed these snakes, but not before he was brutally murdered and his house was set ablaze. The scary part? He had wrote chilling messages on his Facebook wall exposing the California government’s corruption, and indicated he knew they were going to kill him only days before the gruesome attack. Check this out:

Police say a man who had been stabbed was found inside a burning Central Fresno home. He was pronounced dead at the hospital and the neighborhood is in shock. The smoke was spotted by neighbors on Van Ness, just north of Belmont around 3:00 in the afternoon on Wednesday and firefighters just happened to be a few doors down on an unrelated call. Battalion Chief Todd Tuggle said, “While the 911 call was going in, neighbors were flagging down our engine company.” The home was heavily secured with a gate so firefighters had to force their way in. After a quick search, they found a man in the kitchen, unconscious and bleeding from several stab wounds. He was taken to the hospital and pronounced dead. Lt. Joe Gomez with the Fresno Police Department said, “Unknown if the stab wounds caused the death or the smoke inhalation, it’s too early to tell.” Investigators call the death suspicious and they believe the house was intentionally set on fire. Tamara Olivarria who lives across the street said, “He just got those lights fixed and the gate is locked so I’m not sure how anyone would have got in even, but it’s kind of scary.” Police haven’t confirmed it but neighbors say the victim is a man in his mid-40’s– a man who lived alone and worked on boats at the home. Theresa Fuentes says he was a friend and she’s not sure why anyone would want to hurt him. “If it’s a random thing, that makes it much scarier…cause the neighborhood is getting better, we thought,” Fuentes said. Olivarria added, “It’s sad, you know, I hope he didn’t experience a lot of pain.” At this point, there are no suspects and police need help solving the case.

But this is only a small part of the story.  John seemingly predicted his own murder and says Fresno law enforcement is responsible.

Days before his death, he was adamant that Fresno law enforcement would conclude their 7-year-long campaign against him by ending his life.

On Jan. 13, 2016, he shared a brief conversation between him and another person reiterating the reason why Fresno cops were stalking him.

Mac McCauley · Granite Bay, California What occured in your life to bring you to the attention of the cops, both city and county, that you believe you are being stalked?

Mac McCauley I simply voice my opinion regarding local government and politics on local blogs. I also discovered local law enforcement had been running a license plate scanning scam where Fresno Cops would scan license plates at Retail Store parking lots (Save Mart, Von’s, HomeDepot, etc.) in lower income neighborhoods. After collecting hits of violations they then would pull the unsuspecting drivers over a few blocks away from the store location in a marked police vehicle claiming they simply came across their vehicle through routine driving patrols. This unethical and possibly illegal activity was simply motivated by “profit” and unfairly targeted Fresno’s poorer residents. I also discovered the Fresno Bee was sharing chat log data with Fresno Law Enforcement of Fresno citizens who were critical of local Fresno Government and Fresno Law Enforcement. Fresno Law Enforcement subsequently used the ip addresses in the chat logs provided by the Bee to track down, stalk, and harass those chat bloggers who were critical of local politics and local law enforcement. Since publicly exposing these local law enforcement activities it’s been a constant onslaught of stalking, harassment, and intimidation directed toward myself from Fresno Law Enforcement. They even tried to set me up and plant false evidence in my home. I filed a request for an Internal Affairs Investigation and that seemed to enrage them even more. They are simply trying to destroy me by any means possible. I am in constant fear for my life. As Kevin Arial, a Face Book pseudonym and alias of a known local cop so eloquently posted to my Face Book page recently: “First rule of fight club is you do not talk about fight club, You should know this Mr. Lang! ; D”. End quote..

The next day, Jan. 14, John’s Facebook posts became increasingly alarmist (or so we thought). 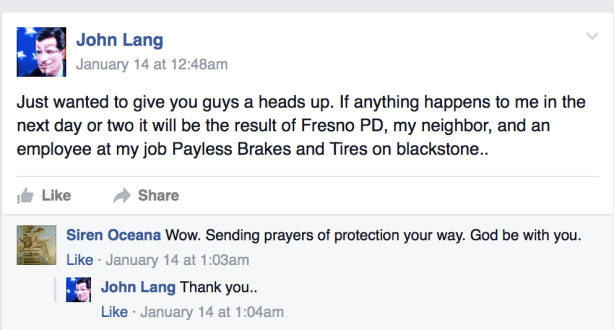 On the 15th, he reached out to reporter Corin Hoggard and claimed that Fresno cops would try to kill him in the next few days. 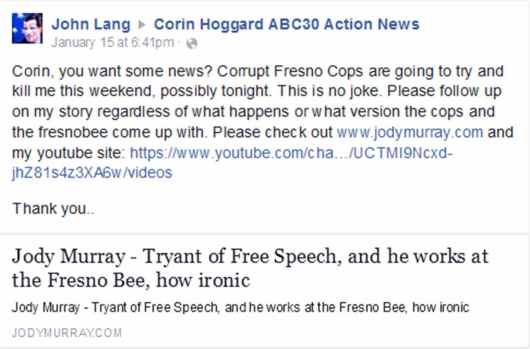 On the 16th, he posted a video showing people he believed meant him imminent harm. 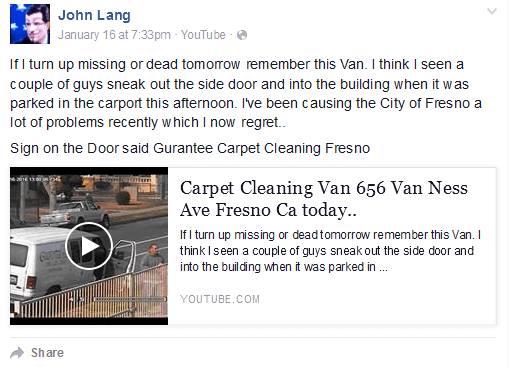 He also asked people to stay at his house with him, with guns, to protect him from “the bad guys” in the van. 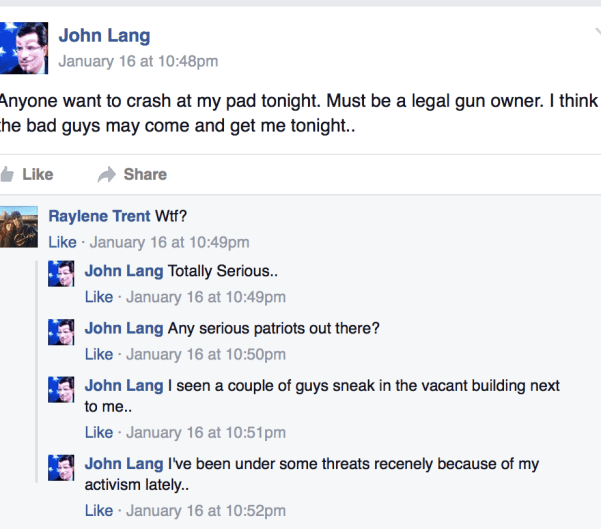 Jan. 17, he wrote this open letter to the DOJ and FBI.

Open Letter the the USDOJ and the FBI I am fairly certain that Fresno Law Enforcement is trying to set me up on some type a charge related to child pornography. I’ve been trying to figure out why they would send Child Molester George Adams Ramirez my way when I was renting the property next to me for Don Green. Also I was at a loss as to how Fresno LE was able to turn so many people against me so quickly. The only thing that makes sense coupled with George Ramirez situation is if Fresno LE told these folks I was a child porn suspect. Imagine a police officer dressed in his official uniform pulling up in a police cruiser. Imagine the same police officer or detective telling a group of coworkers of the accused or other folks that said person is a bad guy who is under investigation for the crimes of child pornography, and cops would like their help in putting a really bad guy away. This would be a no brainier for most reasonable people. There is no more heinous, hideous, and inhuman crime than that of a child porn person. This crime evokes more human emotion than any other. And it is to that effect that Fresno Law Enforcement uses to suit their purpose in my situation. It’s Fresno Law Enforcement’s “weapon of mass destruction”. This would also explain why the FBI shows little interest in my pleas for help. There has long been a believe in Law Enforcement circles that if someone is guilty of something, then helping that process along by fabricating evidence is completely acceptable. This rational can provide a loophole for truth and justice to be ignored when an innocent person is charged or suspected of crimes, as it is with my situation. Let this example serve as a warning to all my activist and blogger friends. We are by no means free. If and when the Government targets us, we are completely and utterly done, and there is really nothing we can do about it. Through my example the Government is trying to drive home the point that they want obidient, submisive, and loyal subjects. And they will settle for nothing less.. I’m also fairly certain I’ve figured out how Fresno Law Enforcement handled the actual access and internet distribution of the offensive material. Let’s just say that the FEDS should re-investigate all Child porn cases in Fresno where ATT Internet Services provided the Internet service. Especially cases where the accused had a conflict with the City Of Fresno or high ranking City of Fresno personnel. Other elements are simply handled by planting various elements of false evidence here and there once they enter a residence. That is why Fresno LE was so determined to get a search warrant for an official home entry in my case. As I’ve mentioned in the past Fresno LE had already illegally and secretly entered by home, copied my hard drives in order to get a good game plan for the eventual false arrest. There also appears to be a pattern here. Anyone who has ever talked publicly about, accused, or discussed Jerry Dyer’s suposed sex scandle with that 16 year old girl has found themselfs in some type of legal peril within a few short years.. And with this letter I have for certain signed my death warrant with Fresno LE. Kind Regards, John Lang Fresno Ca 93728

John first reached out to us in May of 2015. Like many, we thought he was paranoid. Shortly after the initial contact, he registered several domain names for a website that served as an online diary of his experiences. He also had a YouTube channel with 17 videos, all from his home surveillance system. The videos, he says, show police intimidation and suspicious characters who are part of a conspiracy to destroy him.

The content below is unedited and uncut from John’s diary.