We like a KFC as much as the next person, but we can’t imagine living off the bargain bucket alone.

A woman from Portsmouth captured the attention of many around the world after it was revealed she had lived off nothing but KFC for three full years.

We like a KFC as much as the next person, but we can’t imagine living off the bargain bucket alone.

A 21-year-old Georgie Scotney suffered from a selective eating disorder since she was a child. She says the illness caused her to be unable to eat anything other than KFC.

According to Daily Mail reports:

Georgie Scotney had a Selective Eating Disorder from a young age and only ate KFC chicken strips or popcorn chicken with chips because she was too afraid to try anything else.

The 21-year-old from Portsmouth would even go for days without eating if she was away on a school trip – but thanks to a hypnotherapy session she can finally try other foods. 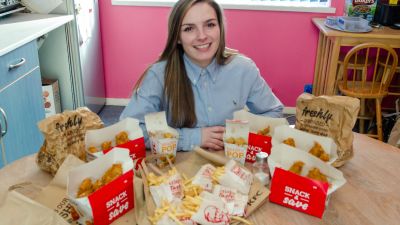 While it is common for children to be picky eaters, most will outgrow the disorder by the time they are adults. For those diagnosed with a selective eating disorder, the unusual relationship with food persists into adulthood. Eating is often accompanied by severe anxiety for those with the disorder.

When she was little, Georgie would only eat chicken and chips, but it eventually got to the point where only a certain brand of fried chicken would do. For the last three years, she has survived on KFC takeaways (with the occasional slice of toast or chocolate bar).

‘Growing up I’d always been really stubborn with what I’d eat, it started off as just southern fried chicken and chips but it then got to the point where it’d only be chicken from KFC – I’d go there every day without fail,’ Georgie recalls.

‘I was just never fed up with it, I loved to put loads of salt on it too, which I now see wasn’t such a good idea – I do think that it had a lot to do with me being scared of a lot of foods, especially sauce, that was the worst fear of mine.’

But, thanks to a one-hour hypnotherapy session, Georgie has finally been able to try other foods – including fruit.

Read more of this report from Taphaps:

The Sund reported that Georgie received support and encouragement from her boyfriend, twenty-five-year-old Dean Arnold, Georgie began to realize she had a problem and needed help. But, her boyfriend wasn’t the only reason she wanted to change. The couple had plans to travel the world.

Of course, they rightfully feared that Georgie’s disorder would cause them problems in places where KFC simply wouldn’t be available. “When we decided that we’d go traveling, I knew that something needed to be done. We’re going for four months, and I knew I wouldn’t be able to eat any of the food — I would have starved,” she recalled.

So, she sought out hypnotherapy, an alternative treatment that’s often used to help break bad habits or cope with things like stress. “My boyfriend was the one who put me forward for the session and I was very skeptical, I warned everyone that I was so headstrong and thought that I’d never be able to change,” Georgie admitted.

Luckily, Georgie was wrong. After a one-hour hypnotherapy session, the woman says she was cured and is now able to eat a wider variety of foods, including fruit. “Never in my life had I eaten any fruit or veg, and I’ve even managed to try a roast dinner now,” a delighted Georgie explained. “I can’t believe that I missed out on so much.”

It’s hard to imagine eating the same exact meal every day for years. What’s even harder to believe is that you’d still look healthy doing just that. Georgie Scotney is definitely lucky that her eating disorder doesn’t appear to have left her with any longterm side effects. It’s a good thing she got help when she did, or her story could have had a different ending.

Luckily, there is help out there for those suffering from an eating disorder, whether it’s ARFID or something else. Just don’t wait until it’s too late to get help. If this young woman can go from refusing to eat anything but KFC chicken and fries to being cured, there’s hope for everyone. Don’t forget to share Georgie’s success story. It might be just what someone who’s quietly fighting their own battle needs to see and hear. You can overcome, just like Georgie proved.